Speech by the Ship's Commander Captain Ernst Lindemann at the commissioning of the Battleship Bismarck.
(Translated from the German by Ulrich H. Rudofsky) 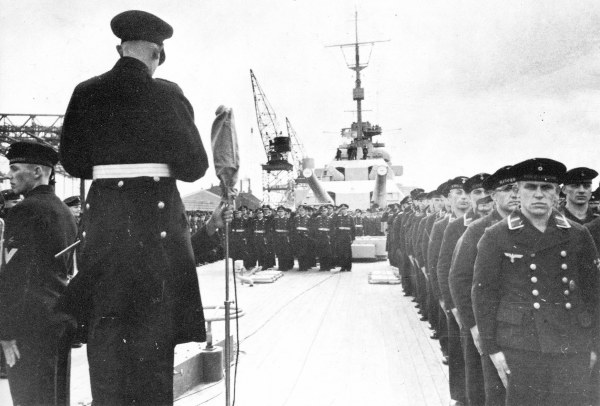 Soldiers of the Bismarck!

The thousand year history of our German nation and Reich were written with iron and blood. Almost every generation had to reach for the sword to fight for the rights of the survival of the Reich and nation or to defend its existence and its freedom against its hostile surroundings. For us the call has come again to join in the great struggle for freedom and the survival of our nation and the existence of the Greater German Reich that was created by Adolf Hitler. In the words of the ancient poets during the wars of liberation:

"Only iron can save us.
Only blood can set us free."

Today, we are being endowed and entrusted with a new and awe-inspiring weapon made from steel and iron, our new ship. Today, it will be brought to life by our young crew which is empowered to blend iron and blood into a powerful symphony of iron-willed devotion to duty and conviction, and with red-blooded vigor and fighting spirit the highest military goals shall be achieved.

This ship, our ship, as we can call it from this day forth, is the largest, strongest and best battleship that has ever been launched by any German or foreign shipyard. We feel pride and gratitude that we have been chosen to take this formidable instrument of power of the German naval rearmament into possession from the hands of its builders. For more than 4 years German designers, engineers, and workers from many German provinces, and especially from this large shipyard, have contributed and labored with their intellect and with the strength of their hands and with their know-how to complete this proud proof of their labors, by delivering to the German sailors and soldiers a battleship with unsurpassable fighting ability and steadfastness. We, the crew of this ship, thank you all from the bottom of our hearts for the grand piece of workmanship. We take it over from you with the solemn promise that we will give it from now on our care, our love, and our devotion.

"The great questions of our time are not only decided by speeches and votes of the majority, but also by iron and blood." Bismarck, the creator of the Second German Reich, the iron chancellor, offered these words 80 years ago to a fatuous congress. For him, who gave this whole epoch his own name, this man is the namesake of our proud ship. Here in Hamburg, we view the lofty monument of this great man, which gazes upon us from across the Elbe River, only a few miles distant from this christening place where the "Old Man" from the forests of Saxony was laid to rest. We sense his spirit and his legacy especially closely now. We have now reported here as the defenders of the nascent Third Reich, to defend it with the sword, with iron and with blood, and to fight for what he, Prince Bismarck, had begun and created and what our Führer Adolf Hitler has rescued and salvaged from the deep abyss: the German Reich's and the Nation's unity and power. With pride and reverence we sense our duty as the crew of the newest and most powerful battleship in the world that carries the name of "BISMARCK". And at the commissioning which I now transact, I cannot quote a better motto for the ship and crew than the words of Schiller which was the chancellor's favorite verse:

"If you don't put your life on the line,
Life will not be worth living."

"Topsides, stand at attention!"
"Hoist flag and ensign!"
(The Dutch March of Honor)
"Topsides, at ease!"

Fellow crewmen! The battleship "BISMARCK" is now in commission. Today, the wire will report it to the Führer. Let us remember at this moment the ending remarks of his speech which he delivered at the launching of our ship [on 14 February 1939], and this is what he said:

"May the German soldiers and officers who have the honor one day to sail on this ship always prove worthy of their namesake! May the spirit of the Iron Chancellor be transmitted on to you, may he escort you in all your missions during the joyful voyages in peace, but may his spirit be for you a beacon of strength in the hours when duty demands the severest sacrifice!

With these ardent wishes the German nation greets its newest battleship, the 'Bismarck'!"

Comrades, something the Führer could only predict 1 ˝ years ago has now turned into reality. Already, numerous opponents have been thrown to the ground and have been destroyed by the glorious deeds of our armed forces. Only one, our archenemy, England, remains. We pledge herewith that we will do honor to the Greater Germany whose historical greatness is also embodied in the name of our ship, and that we will prove ourselves worthy of the words of our Führer and observant of his commands. This pledge we summarize with these words.