The history of the battleship Bismarck has drawn the attention of many artists over the years. If you are a painter and want to have your art displayed here don't hesitate to contact the webmaster. Click on images to enlarge. 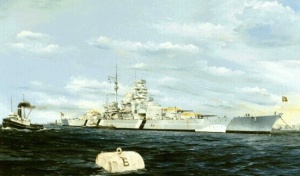 1. Oil painting made by Australian Randall K.G. Wilson depicting the Bismarck made fast to a buoy in Gothenhafen, May 1941. 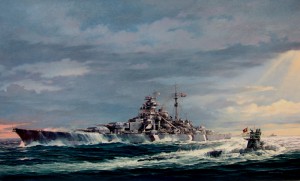 2. Oil painting made by Artist Marii Chernev depicting the Bismarck and the U-556 in the Baltic Sea in the Spring of 1941. Cruiser Prinz Eugen is in the far back. The original painting has a size of about 30 x 24 inches and it is owned by Erwin Wiedmer from Switzerland. 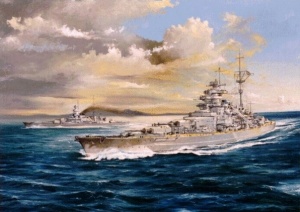 3. The Bismarck and the Prinz Eugen leaving the Korsfiord in Norway late on 21 May 1941. The camouflage paint in the hull had been painted over earlier in that afternoon, and now only the false bow wave remains. By maritime artist Randall Wilson. 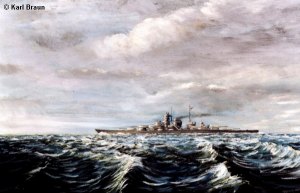 4. "Bismarck in the Atlantic". This scene depicts the maiden voyage of the ship as it was searching the Atlantic for Allied convoys. Painted by Karl Braun, a practising New Zealand artist specialising in historical military paintings. 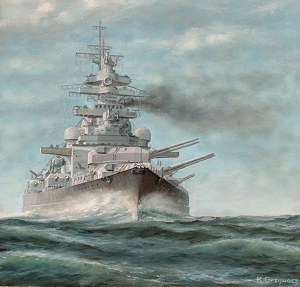 5. The Bismarck ready of open fire. Painting made by Polish artist Krzysztof Grzywacz. 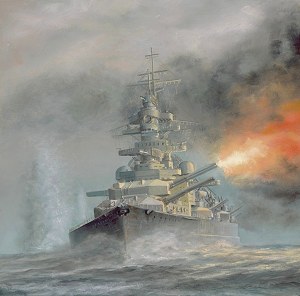 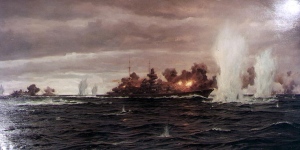 7. Painting by German maritime artist Claus Bergen (1885-1964). It depicts the Prinz Eugen and the Bismarck opening fire on Vice Admiral Holland's force during the Battle of the Denmark Strait on 24 May 1941. 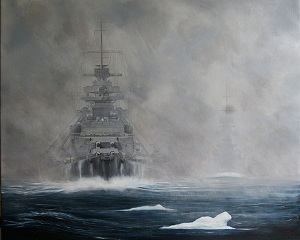 8. The Bismarck and the Prinz Eugen in the Denmark Strait on 24 May 1941. Painting by British artist Jon Kindred. 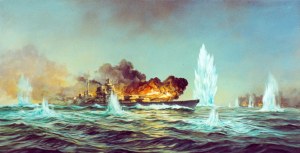 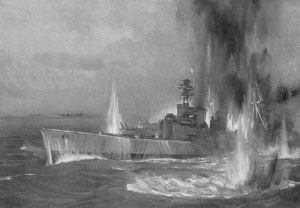 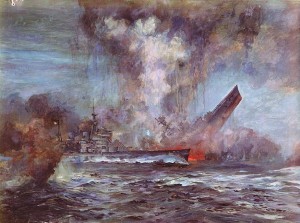 11. At 0601 hours on 24 May 1941, the British battle cruiser Hood breaks in two and sinks behind the battleship Prince of Wales. By J.C. Schmitz-Westerholt. 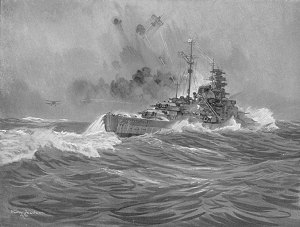 12. Painting made in 1941 by artist Walter Zeeden depicting the battleship Bismarck fighting off the attack by Swordfish torpedo aircraft from carrier Victorious at midnight on 24 May 1941. As a result of this attack, the Bismarck was hit by one 18 inch MK XII torpedo on the starboard side, amidships. The damage was insignificant, but the shock of the impact caused one casualty aboard: Oberbootsmann Kurt Kirchberg. 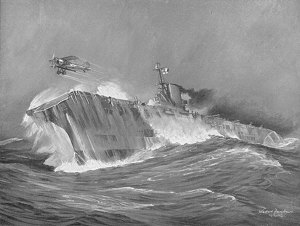 13. Painting made in 1942 by artist Walter Zeeden depicting the launching of a Swordfish torpedo aircraft from the deck of carrier Ark Royal on 26 May 1941. 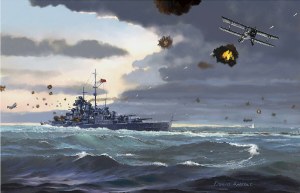 14. The Bismarck attacked by Swordfish torpedo planes from aircraft carrier Ark Royal in the evening of 26 May 1941. Painting made by British marine artist Dennis Andrews. 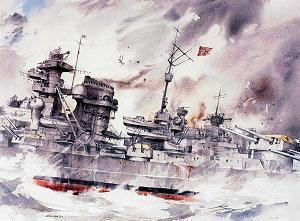 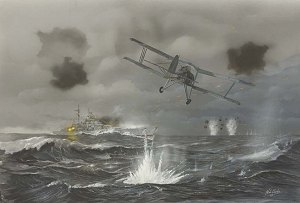 16. Last Chance! Another scene of the decisive air strike against the Bismarck on 26 May 1941. Painting made by British marine artist Nick Clarke. 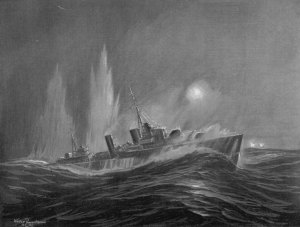 17. Painting made in 1942 by artist Walter Zeeden depicting Captain Vian's destroyer, Cossack, engaged by the Bismarck during the night of 26-27 May 1941. 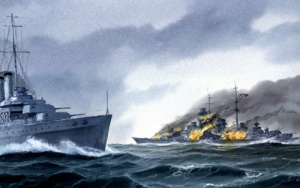 18. The British heavy cruiser Dorsetshire is about to deliver the final torpedo attack on the Bismarck in the morning of 27 May 1941. Water colour painting made by Finnish marine painter Hĺkan Sjöström. 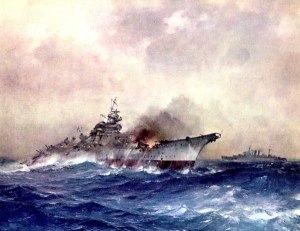 19. The end of the Bismarck with a heavy port list and about to capsize. H.M.S. Dorsetshire can be seen in the background. Painting by Charles E. Turner. 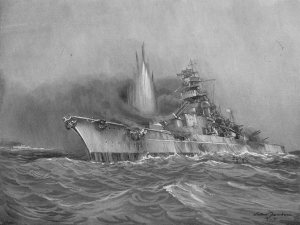 20. Painting made in 1941 by artist Walter Zeeden depicting the destruction of the Bismarck. 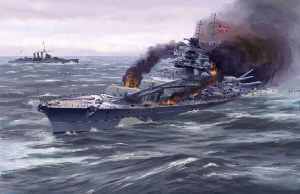 21. The Bismarck listing to port and sinking by the stern. By marine artist Dennis Andrews.