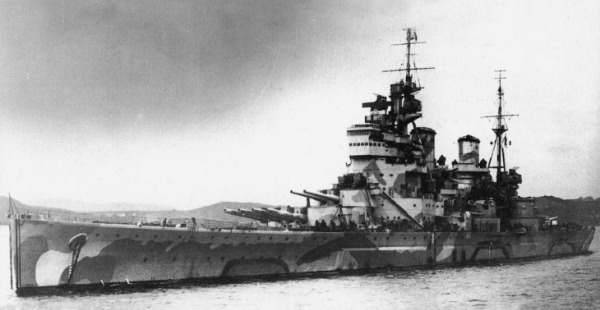 The battleship Prince of Wales was the second ship of the King George V class. In May 1941, she was sent to the Atlantic together with the HMS Hood to intercept the Bismarck, and participated in the brief engagement at the Denmark Strait that resulted in the sinking of the famous British battlecruiser. Two months later, the battleship transported Prime Minister Churchill across the Atlantic to Newfoundland to meet with President Roosevelt. In October, the Prince of Wales was sent to Singapore to act as a deterrent against a possible Japanese aggression. On 10 December, she was bombed, torpedoed and sunk together with the battlecruiser Repulse off the coast of British Malaya by land-based Japanese planes operating from Indo-China some 400 miles away. The Prince of Wales was the first and only modern British battleship sunk in World War II, and the final action marked the first time in which capital ships were sunk exclusively by an air attack while at sea. 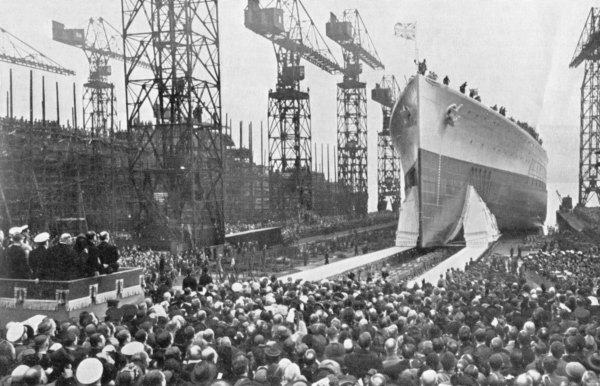 The launching of the Prince of Wales at Birkenhead on 3 May 1939.

Night of 31 August 1940: While undergoing outfitting at the Shipyard, the ship is damaged by a near miss bomb during a German air raid.

25 March 1941: Prince of Wales arrives in Scapa Flow and begins her sea trials.

21 May 1941: Shortly before midnight, the Prince of Wales departs Scapa Flow for Hvalfjord in Iceland together with the battlecruiser Hood flying the flag of Vice-Admiral Lancelot Ernest Holland, and escorted by destroyers Achates, Antelope, Anthony, Echo, Electra, and Icarus. Their mission is to cover the access points south and east of Iceland in case the German battleship Bismarck tries to break into the Atlantic.

0535. The Prince of Wales sights the Bismarck and the Prinz Eugen in the Denmark Strait.

0552, 0553. Hood and Prince of Wales open fire with their forward turrets on the Prinz Eugen and the Bismarck respectively. Distance 25,000 yards.

0601. The Hood is hit in the after magazine by a 38cm projectile from the Bismarck and blows up.

0602. The Prince of Wales is hit in the bridge by a 38cm projectile that kills everybody there, except Captain Leach and another man.

0603. Captain Leach breaks off the action and turns away under a smoke screen, after being hit by 4 x 38 cm and 3 x 20.3 cm projectiles from the German warships. "Y" turret continues to fire under local control while retreating but no more hits are obtained on the enemy. The Prince of Wales fires a total of 18 salvos plus 3 more with "Y" turret, and expends 55 x 14-inch shells overall. 13 fatal casualties on board.

1846-1856. Artillery engagement with the Bismarck from 30,000 yards. The Prince of Wales fires 12 main battery salvos but due to the extreme range obtains no hits. Overall, 41 x 14-inch shells are fired.

27 May 1941: At 0530 hours, the Prince of Wales arrives at Reykjavik with the light cruisers Aurora, Galatea and four destroyers. The battleship anchors in Hvalfjord. While anchored there transmits the first battle reports to the Admiralty about the engagement in the Denmark Strait.

June-July 1941: Undergoes repairs at Rosyth. The three UP rocket launchers located on top of "B" and "Y" turrets are removed and replaced with two "Pom-Pom" mounts. A new Type 273 surface search radar is added.

09-12 August 1941: Anchored at Placentia Bay, Newfoundland, after bringing Prime Minister Winston Churchill and the First Sea Lord, Admiral Pound, across the Atlantic to meet with President Franklin D. Roosevelt. This meeting ends in a joint declaration (later known as the Atlantic Charter) which outlines the aims of the UK and the USA for the postwar world.

15 September 1941: Departs Scapa Flow to provide escort to Convoy WS.11X from the Clyde to Gibraltar.

TO THE FAR EAST

28 November 1941: Prince of Wales, Electra and Express reach Colombo and later meet with the battlecruiser Repulse.

02 December 1941: Prince of Wales, Repulse, Electra, Express, Encounter and Jupiter arrive in Singapore. The Prince of Wales becomes the flagship of Force Z, under the command of Admiral Phillips.

08 December 1941: Shortly after the attack on Pearl Harbor, at 0400 hours (local time, Zone -7Į), Singapore is bombed by Japanese aircraft. Later in the afternoon, after receiving reports of Japanese landings at Singora and Kota Bharu, Admiral Phillips leaves Singapore at 1735 hours, with the Prince of Wales, the Repulse and destroyers Electra, Express, Vampire and Tenedos, in order to attack the enemy transports.

09 December 1941: In the evening, Force Z is sighted by Japanese reconnaissance aircraft, and having lost the element of surprise, Admiral Phillips decides to head south back to Singapore at 2015 hours. However, shortly before midnight, a new report is received mistakenly informing of Japanese landings at Kuantan which was not far away, and therefore, Force Z alters course towards Kuantan.

10 December 1941: Force Z arrives off Kuantan at 0800 hours only to find that no enemy forces are landing there. Shortly after 1100 hours, Force Z is attacked by a series of waves of Japanese aircraft belonging to the 22nd Air Flotilla based in Indo-China. During the first attack, at 1118 hours, by 9 Mitsubishi G3M2 "Nell" high level bombers flying at 10,000 feet, the Repulse is hit by one bomb on the port hangar but no serious damage is caused. At 1144 hours, 9 Mitsubishi G4M1 "Betty" torpedo bombers attack the Prince of Wales that is hit by one Type 91 torpedo on the port side putting both port shafts out of action and causing serious damage aft. The ship takes a 11║ list to port and speed drops to 15 knots. At 1156, torpedo bombers attack the Repulse but the ship succesfully avoids the enemy torpedoes. At 1210, PoW hoists the "not under control" signal. At 1222, the Prince of Wales is attacked again by another squadron of torpedo bombers that obtain 3 more hits on the starboard side further reducing the speed of the battleship to 8 knots. At this time, Repulse closes to assist the Prince of Wales, but at 1225 the battlecruiser is hit by one torpedo jamming her rudder, followed by 3 more hits sealing the ship's fate. At 1233, the Repulse rolls over to port and sinks with the loss of 513 men. At 1305, destroyer Express comes alongside the starboard side of Prince of Wales to rescue the crew and remains there until the very last moment. The Prince of Wales finally sinks at 1320 hours with the loss of 327 men including Admiral Phillips and Captain Leach. The Japanese lose 3 aircraft.