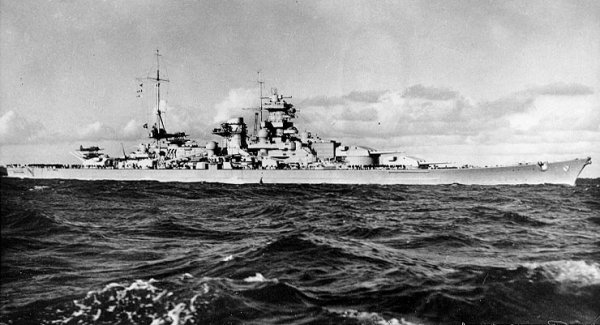 15 June 1935: Keel Laid down on Slipway 2 at the Kriegsmarinewerft shipyard in Wilhelmshaven. Construction number S 125.

03 October 1936: Launched. The pre-launch speech is delivered by the Commander-in-Chief of the Armed Forces, Generalfeldmarschall Werner von Blomberg, and the ship christened by the widow of Captain Felix Schultz, lost with the armoured cruiser Scharnhorst during World War I.

01 April 1939: Following the launching of the battleship Tirpitz in Wilhelmshaven, Erich Raeder is promoted to Grand Admiral aboard the Scharnhorst.

21 September 1939: Captain Kurt Hoffmann takes over command of the Scharnhorst from Captain Ciliax.

17 October 1939: At Wilhelmshaven, the crew of the Scharnhorst lined up on deck, welcomes U47 (Lieutenant Günther Prien) after its successful attack in Scapa Flow.

21 November 1939: Departs Wilhelmshaven with her sister-ship Gneisenau under the command of Vizeadmiral Wilhelm Marschall.

23 November 1939: Shortly after 1600 hours, Scharnrhost and Gneisenau engage the 16,697-ton British auxiliary cruiser Rawalpindi (Captain Edward Kennedy) that finally sinks at about 2000 hours. The Scharnhorst is hit by a 152mm projectile from the Rawalpindi but the damage is insignificant. Picks up 27 survivors.

27 November 1939: At midday arrives at Wilhelmshaven.

December 1939-February 1940: The MES (Magnetischer Eigenschutz) "magnetic self-protection system" is installed, and a new FuMO 22 radar set is mounted on the foretop platform.

06 April 1940: Operation Weserübung. At midnight, leaves Wilhelmshaven with Gneisenau as the cover force of "Group I" for the invasion of Norway.

09 April 1940: Shortly after 0500 hours, some 50 miles off Narvik, Scharnhorst and Gneisenau under the command of Vizeadmiral Günther Lütjens, are engaged by the British battle cruiser Renown. In a brief exchange of fire the Gneisenau is hit by one 15-inch and two 4.5-inch projectiles. The Renown in turn is hit by two 28cm shells.

12 April 1940: In the evening, Scharnhorst, Gneisenau, and Admiral Hipper arrive in Wilhelmshaven.

08 June 1940: At about 1600, the Scharnhorst sights the British carrier Glorious (Captain D'Oyly-Hughes) escorted by the destroyers Acasta (Comander Charles Glasfurd), and Ardent (Lieutenant Commander J. F. Barker). At 1632 opens fire from 26,000 meters (28,500 yards). Six minutes later at 1638, from 24,000 meters (26,300 yards) the Glorious is hit in the flight deck starting a fire. Gneisenau opens fire at 1642, and a few minutes later the Glorious is hit again in the bridge killing the Captain and most of the personnel there. At 1656, Scharnhorst and Gneisenau cease fire temporarily due to smoke screen launched by the escorting destroyers. Thereafter, the Ardent launches eight torpedoes but obtains no hits and is sunk by the combined fire of both German battleships at 1725. The Glorious comes again under fire, and at 1720 she is hit in the centre engine room. Meanwhile, the Acasta closes on, and at about 1730, obtains a torpedo hit on Scharnhorst's starboard side under turret "Cäsar". The torpedo tores a hole of 14x6 meters in the hull, and 2,500 tons of water get on the ship. As a consequence of this torpedo hit the after 28cm turret is put out of action, and 48 men die. Heavily damaged the Glorious capsizes and sinks at 1810. The Acasta finally sinks at 1820. In all more than 1,500 British sailors lose their lives. During this action Scharnhorst expends 212 x 28cm and 842 x 15cm shells.

09 June 1940: In the afternoon, Scharnhorst and Gneisenau arrive in Trondheim.

13 June 1940: During the course of an air raid while lying at Trondheim, the Scharnhorst is hit by a 225-kg bomb that fails to detonate.

21 June 1940: After temporary repairs in Trondheim, the Scharnhorst returns to Kiel.

23 June 1940: In the evening the Scharnhorst arrives in Kiel. 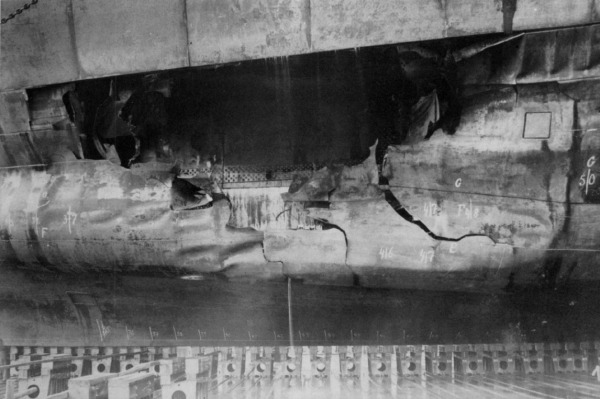 Damage caused by the torpedo that hit Scharnhorst on 8 June 1940.

23 January 1941: Operation Berlin. Scharnhorst and Gneisenau, under the command of Admiral Günther Lütjens, depart Kiel for the Atlantic.

28 January 1941: Scharnhorst and Gneisenau sight the British cruiser Naiad in the Iceland-Faroe strait and turn around.

05 February 1941: Scharnhorst and Gneisenau enter the Atlantic through the Denmark Strait, and refuel from tanker Schlettstadt some 150 miles south of Cape Farewell.

27 February 1941: Scharnhorst and Gneisenau refuel from tankers Ermland and Friedrich Breme and head to the Canary Islands.

06 March 1941: Scharnhorst and Gneisenau meet with U124 (Lieutenant Wilhelm Schulz).

11-12 March 1941: Scharnhorst and Gneisenau refuel from tankers Ermland and Uckermark. Conference held on board Gneisenau with the Captains of both battleships and the tankers.

March-July 1941: Develops problems with her engines and enters dry dock for repairs.

24 July 1941: Hit by five bombs while testing the machinery at La Pallice. 3,000 tons of water get on ship and the damage is considerable.

09 January 1943: Operation Fronttheater. Leaves Gotenhafen bound for Norway together with the Prinz Eugen and destroyers Paul Jacobi, Friedrich Ihn, and Z24, all under the command of Admiral Otto Schniewind. Detected by British planes off Skagen on the 11th, the group returns to Gotenhafen where it arrives on the 12th.

23 January 1943: Operation Domino. Sails for Norway again with Prinz Eugen but is detected one more time by British planes and therefore returns to the Baltic.

06-09 March 1943: Operation Paderborn. In favourable weather Scharnhorst succeeds in breaking out and is finally trasferred from Germany to Narvik where she is to join the battleship Tirpitz and the heavy cruiser Lützow (ex-Deutschland).

23-24 March 1943: Operation Silesia. Tirpitz, Scharnhorst, Lützow and six destroyers are transferred from Bogen Bay to Altafjord where they run trials until July.

06 September 1943: Operation Sizilien. Together with the battleship Tirpitz, and the destroyers Z27, Z29, Z30, Z31, Z33, Erich Steinbrinck, Karl Galster, Hans Lody and Theodor Riedel, leaves Altafjord under the command of Admiral Oskar Kummetz, to attack the allied installations in the island of Spitzbergen.

08 September 1943: The group bombards Spitzbergen and destroy the port facilities.

25 December 1943: Operation Ostfront. At 1900 hours, Scharnhorst departs Altafjord with the destroyers of the 4th Flotilla (Kapitän zur See Rolf Johannesson) Z29, Z30, Z33, Z34, and Z38 to intercept the convoy JW55B of 19 ships. The battle group is under the command of Konteradmiral Erich Bey.

26 December 1943: At 0834 hours, is detected by the heavy cruiser Norfolk from a distance of 30,000 meters (32,800 yards). Shortly afterwards the light cruisers Belfast and Sheffield of "Force I" (Vice-Admiral Burnett) also obtain contact. At 0924, the Belfast opens fire on Scharnhorst from 11,900 meters (13,000 yards), and is followed by Norfolk at 0930. Scharnhorst replies with her after turret but obtains no hits. Scharnhorst is hit by two 8-inch projectiles from Norfolk. One shell strikes the battery deck but fails to explode. The other hits the foretop and disables the radar apparatus (FuMo 27). Scharnhorst turns away southeast at 30 knots and then north again. Shortly after 1200, Scharnhorst runs once again into the cruisers of "Force I", and opens fire at about 1230 with her main and secondary batteries. In this second engagement, the Norfolk is hit twice by 28cm shells. Turret "X" is put out of action after a hit in the barbette, while another shell disables the radars and kills seven men. The Sheffield is hit by splinters. At 1241, Scharnhorst turns away south and ceases fire. At 1617, the battleship Duke of York of Force II (Admiral Fraser) obtains radar contact with Scharnhorst from 42,500 meters (46,480 yards), and after closing the range to 10,900 meters (11,920 yards) opens fire at 1648. Almost immediately the Scharnhorst is hit by a 14-inch projectile in turret "Anton" that is put out of action. Another shell from Duke of York demolishes the hangar. At 1657, Belfast and Norfolk open fire. Scharnhorst is repeatedly hit but manages to increase the distance with "force II" to 19,600 meters (21,435 yards). At 1820, a 14-inch projectile passes through Scharnhorst's upper belt and reaches the No.1 Boiler room (section IX) that becomes a total loss. The speed drops to 22 knots. At 1850, the destroyers of "Force II" close on and obtain one torpedo hit on Scharnhorst's starboard side and three more on the port side. Speed drops to 20 knots. Duke of York and Jamaica open fire again at 1901 from 9,600 meters (10,500 yards) obtaining numerous hits. Scharhorst still fires back with turrets "Bruno" and "Cäsar" but obtains no hits. At 1912, the cruisers of "force I" open fire. Thereafter cruisers Jamaica and Belfast launch all their torpedoes, and destroyers Musketeer, Opportune and Virago 19 more. The Scharnhorst finally capsizes and sinks at 1945 hours in position 72ş 16' North, 28ş 41' East. 36 survivors.

03 October 2000: The wreck of the Scharnhorst is found 66 miles north-northeast of North Cape. It lies some 290 meters deep, upside down and heavily damaged.