Oil painting made by Artist Marii Chernev depicting the Bismarck and the U556 in the Baltic Sea in the spring of 1941. Cruiser Prinz Eugen is in the far back. The original painting has a size of about 30 x 24 inches and it is owned by Erwin Wiedmer from Switzerland.

"... to us on board the Bismarck, the U556 was no ordinary U-boat. There was a very special bond between the little boat and the giant battleship. Both were built at Blohm & Voss and in the summer of 1940 they were often neighbors on the ways. When the U556 was commissioned, the mighty bow of the Bismarck towered over her. Kapitõnleutnant Wohlfarth, who was known in naval circles as ōSir Parsifal,ö decided that the commissioning ceremony would not be complete without a band and, since a U-boat certainly did not carry one, he would ask the big neighbor (which as Fleet Flagship had a band) his band and thereafter his artistically designed Patenschaftsurkunde (Certificate of Sponsorship) hung in the Bismarck.

Lindemann and Wohlfarth became friends. At the beginning of 1941 the Bismarck and the U556 were together during gunnery exercises in the Baltic, and once even used the same target. The U556, which Lindemann had allowed to precede him, damaged the target so badly with ten hits that the Bismarck could not use it that day. Lindemann, however, did not take it amiss and soon dispelled Wohlfarth's fear that he would be greeted with an ill-humored reaction, "I do not begrudge you that in the least. I wish that you may have as much and rapid success in the Atlantic and win the Knight's Cross for it." Relieved, Wohlfarth replied, "I hope we both receive the Knight's Cross in the common struggle in the Atlantic."

On 24 May, 1941, Wohlfarth heard over the radio about the sinking of the Hood during the operation he had just ended against convoys. At first he could not believe it. Now, only two days later, the situation of the Bismarck was drastically different, almost hopeless. What did his Patenschaftsurkunde say? "We, the U556 (500 tons), hereby declare before Neptune, the ruler of the oceans, lakes, seas, rivers, brooks, ponds, and rills, that we will stand beside our big brother, the battleship Bismarck (42,000 tons), whatever may befall her on water, land, or in the air. Hamburg, 28 January 1941. The commander and crew of the U556." One of the two sketches on the certificate shows "Sir Parsifal" warding off aircraft attacking the Bismarck with a sword in his thumb. The other sketch shows the Bismarck being towed by the U556. It almost seemed as though Wohlfarth had the gift of prophecy when he prepared that certificate.

Help against aircraft and torpedoes, and then a tow. That was exactly what the Bismarck needed, and he, of all people, Godfather Wohlfarth, was near her. But he was powerless to help her." 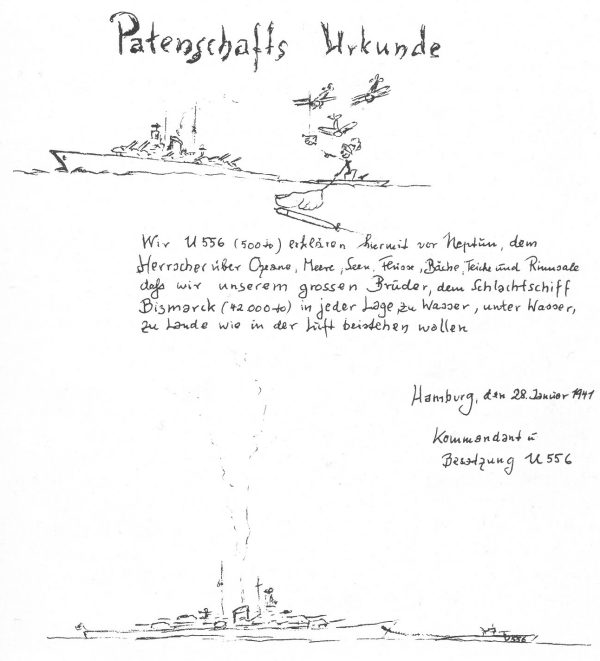