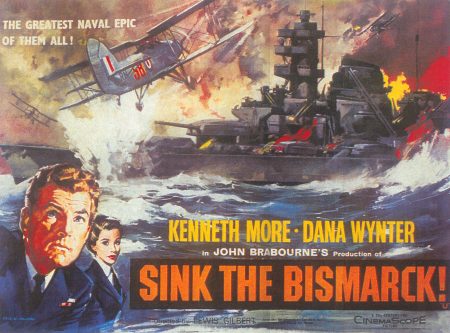 Sink the Bismarck! is, up to date, the only movie made that deals directly with the operations, chase, and sinking of the battleship Bismarck. It is a British production based on the book of Cecil S. Forester (1899-1966): “Hunting the Bismarck”. The movie starts with original newsreel footage of Bismarck's launching in Hamburg. The main character is the fictitious British Chief of Operations, Captain Shepard, a cool man devoted to do his job who tries to keep his own personal feelings away. What people tend to criticise in this movie is the portrayal of personality of Admiral Lütjens. He is depicted as fanatical Nazi with a blind faith in his "unsinkable" battleship; moreover, he refuses to accept any suggestions from Captain Lindemann whose role in the movie depicts him as very passive character.

The models of the warships used are good, but the movie itself has a few historical inaccuracies. For example, two Swordfish are shot down, and a British destroyer (HMS Solent!) is blown up by the Bismarck, when actually nothing of the kind really ever happened. Anyway, besides those details, and keeping in mind the year of production, the movie is accurate enough, and every Bismarck fan would enjoy it. Let's hope to see a new Bismarck movie anytime soon.

A true story of heroism at sea. Heroism and hard choices are the order of the day as the Royal Navy desperately tries to destroy the most powerful battleship in the world - the Bismarck. In the spring of 1941, England remains the only undefeated nation in Europe and stands alone against Nazi Germany. But she can survive only as long as her vital ocean supply lines remain open. The biggest threat to shipping is Germany's floating fortress, the Bismarck, which is faster and has more fire power than anything Britain can throw against it. In port for the last three months, the dreaded Bismarck is now returning to the open sea to dominate the North Atlantic. This juggernaut of destruction must be stopped, and Churchill himself gives the order to the Royal Navy - sink the Bismarck at any cost! Featuring actual combat footage, this gripping film puts you on the front lines of one of the most crucial naval engagements of World War II.